I’m a critic of the overly simplistic “just make it pink” approach to gender equality in STEM fields. I’m not talking about using a pretty colour scheme for your editor, having pink gear, or designing code projects around commonly feminine activities. To me, these things are taking your version of womanhood or girlhood, and insisting there be space for it in STEM. That’s awesome.

I’m talking about making ads like the one in this article. (Happily, I haven’t seen a new example of it for a while.) Or colour-coding every femme tech event, flyer, group and website in pink.

It’s not because there’s anything wrong with feminine things – they’re great, I love pink! It’s because it lumps women and girls into one, sparkly, pink monolith. Because, at least for girls, if not adult women, I’m not convinced it draws them in (I know so many women who would have run a mile as kids, devoted to maintaining an ill-thought-through anti-pink dignity). And because this approach may actually be harmful, increasing the risk of stereotype threat.

To avoid this, it seemed like a good idea to focus on the achievements of women in STEM fields, and ignore the stereotypes that girls don’t like science, or aren’t good at maths. The message was that you can do anything you want! Follow your interests!

But, listening to women scientists and technologists speak about their passions and motivations at a recent International Women’s Day event in Tbilisi, I had an epiphany.

Maybe we won’t ever break down the gender participation gap in STEM fields until we make the case that women and girls should study and work in these areas without loving the fields. That these fields can be a means to an end, and not just the love of a lifetime, and that’s OK.

(We also need to deal with discrimination, racism, toxic work environments, aggressive competition, sexual harassment, the gender and race wage gaps, transphobia and men’s violence, but there’s only so much one can cover in an epiphany.)

More about that in a minute.

I have a lot in common with the women who speak at official #WomenInSTEM events. As a software developer, I work in a STEM field. I’m often the only woman in the room at tech events (though happily not in my workplace). I read xkcd and I love BubbleSort's shirts.

But when these leaders in STEM speak of their girlhoods, their beautiful and inspiring stories of their thirst to know how things work, to pull them apart, to build them back up from scratch… I can’t relate.

I was often found up trees, but pretending to be a witch that could heal environmental damage, not studying bugs. I was always reading when I was supposed to be sleeping, but it was Steven King and Sweet Valley High, not fantasy and sci-fi. I was a little weirdo nerd, but not the right kind.

I hated maths and science in school. I couldn’t see how they related to any job I would want to do. I wanted to help people, make art, cook food, and more than anything I wanted to tell the sexists and racists and the homophobes where to go (yes, even in primary school). I definitely did not want to memorise boring facts about ohms and atoms. I worked just hard enough at those subjects to keep people off my back, and avoid too much criticism about ‘not applying myself’, but without ever actually applying myself.

I got into software development many years later the way many women get into so-called non-traditional fields and hobbies – I was helping someone else. I initially had no intention of making it my profession.

It’s not the tale of courage and self-determination celebrated by tech media, but it is a valid path, and it’s mine.

“Just make it pink!" is the irksome result of people using a Disney princess in place of their real audience. It’s too narrow a message to get the job done.

But back in the IWD event, listening to the excellent speakers, it occurred to me: If the only other message comes from those women who have succeeded in STEM through enthusiasm and grit, it will also be too narrow. It’s skewed toward those with an innate interest in the details of their fields, strong enough to help overcome the challenges unique to women and other marginalised people.

It is a form of survivorship bias. “This is what got me through, so this is what it takes."

Don’t get me wrong. We need to be making space for those women and girls who do want to go on space camps, pull apart old computers in their free time, and hack into things just to see if they can. These people are the backbone of STEM fields. And these girls and women face real discouragement and discrimination, which needs to be scrubbed from education and workplaces before anything like equality can be achieved.

But if we want true diversity, to represent those experiences and points of view that get ignored, we need to go further than that. Having more women in the room is a step in the right direction, but we also need to pay attention to diversity of interests, experiences, personalities and values. I want more space for women (and men) who are moved by outcomes, not just the mechanics.

We don’t require all family doctors to be endlessly fascinated with the finer points of microbial imbalance – we want them to care about making us feel better, and to know enough to do so. It’s not a zero-sum game. In an increasingly techie world, I’m certain there is space for people who are motivated, but not fascinated.

In addition to the benefit this would bring to STEM fields, I think this may be one way to deal with the gender and ethnicity interest-gaps fed by cultural expectations, economic realities, childhoods full of ‘nice girl’ role-models, and lacking adult encouragement.

So if this approach isn’t enough, and pinkifaction is harmful, what should we be doing? We need to find out why other women and girls, those with the aptitude but no interest, aren’t interested. I think we ought to be focussing on two approaches.

The first, representation, has been in progress a long while. “You can’t be what you can’t see” is fairly well accepted. This is the approach people are taking when they hold events celebrating women in STEM. It’s also the approach people are trying to take with ‘STEM Barbie’. It’s tricky, as it suffers from the bias I described above, and potentially falls into the stereotype threat trap, but it’s worth it even when it’s flawed.

The second is harder, but even more important. I believe we need to broaden the focus from encouraging only the fascination for the ‘how’ of science and technology, the ohms and atoms, to including a focus on the ‘why’.

Why would you want to study or work in maths, science or technology, if it didn’t hold an inherent fascination for you? Maybe girls want to help people with science. Maybe they’d like to fix inequalities with STEM. Maybe they’d even embrace maths just to stick it to the patriarchy!

As I said earlier, women and girls aren’t a monolith. Their experiences, interests, race, community expectations, location, religion, class and economic background all help define what their ‘whys’ are.

I don’t know how education systems handle STEM these days. Maybe it’s perfect now. But I suspect that there is still a focus on those children who show a fascination for the ‘how’, by enthusiastic and well-meaning adults who share that fascination. That’s great, but it’s not enough.

An education focusing on my ‘whys’ would have made a radical difference to me.

We need to listen to women and girls, and make space for them to bring their full selves. What will bring more women and girls to STEM? We won’t know until we stop telling girls how cool STEM is, and instead ask them what they want to see in the world, and show them how they could achieve those aims through STEM. 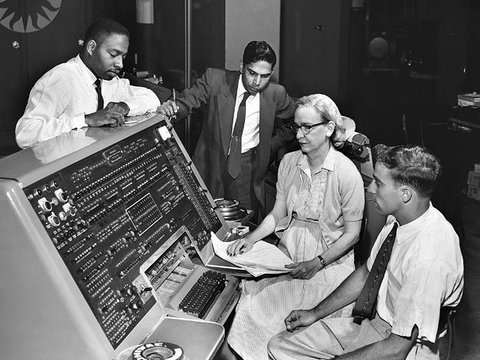 Not Your Grandma's Lazy Stereotype

A plea to conference speakers